Just after dawn the legislature passed the budget after being on lock down since Tuesday night.  The budget package was one vote short and Senator Abel Maldonado provided the final Republican vote needed to pass the agreement.  In return for his vote, Senator Maldonado wanted the budget package to include 3 constitutional amendments and elimination of the gas tax increase. The first amendment would allow an open primary system; the second would deny legislators pay if the budget in not approved on time and the final amendment would prohibit legislators from receiving a salary increase when the state is facing a deficit.  In the end, the Senator got the open primary and prohibition on salary increases as well as the elimination of the gas tax increase. 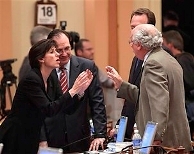 To account for the loss of the gas tax revenue the plan would increase the income tax surcharge by .25%, rely on additional federal funds and provide the Governor $600 million in additional cuts.While Senator Maldonado provided the final vote to move the budget, his opportunistic move came at the expense of lost of jobs, delays in infrastructure projects and countless hardships for working families.CSEA and the Education Coalition, as well as key labor organizations and social services advocates actively opposed many aspects of the budget agreement. The agreement contains draconian cuts to education funding and other social services programs. Over 9,000 classified employees have already lost their jobs due to the $3 billion cut in September.  The additional cuts contained in this budget will END_OF_DOCUMENT_TOKEN_TO_BE_REPLACED

CSEA and our Education Coalition partners, which include parents, teachers, administrators, school boards, school business officials and county superintendents, are encouraging local school boards to begin their budgeting process immediately to inform the local community and their legislative representatives of the detrimental impact the Governor’s proposed cuts will have on local education programs.

In the past we have treated the Governor’s budget proposal as an opening for negotiations and encouraged school districts not to overact to this proposal, while we lobbied locally and in Sacramento to put pressure on the Governor and the legislature to increase funding for education. However, the state budget is in such an unprecedented crisis, and the stakes so high for education, that a new approach must END_OF_DOCUMENT_TOKEN_TO_BE_REPLACED